Riigikogu to vote on UN Migration Compact declaration on Monday

On Monday the Riigikogu will debate and vote on its declaration of support for the UN Compact on Migration. Prime Minister Jüri Ratas (Centre) has announced that his next actions will depend on the outcome of the parliamentary vote, announcing that he is ready to have the coalition government vote on the Compact as well if needed.

The Monday sitting starts at 10.00 EEST. The parliament will first debate and vote on proposed amendments to the text of the declaration, the declaration itself will be put to a vote once the debate is over. ERR News will follow the developments during the day.

The declaration is supported by two of the three coalition partners. While the Social Democrats (SDE) were the ones that moved for the declaration, the governing Centre Party supports it. The third coalition partner, Pro Patria, is against Estonia's adoption of the UN Compact on Migration and will vote against any attempt of the Riigikogu to declare its support of it.

The Conservative People's Party of Estonia (EKRE) as well as most MPs of the Free Party and some of the parliament's independents are expected to vote against the Compact as well.

The Reform Party, whose 17 years in government contributed substantially to the shaping of Estonia's current foreign policy, demands amendments to the declaration, most importantly that it include a call for a government decision on the Compact.

This would make little difference, as it would revert the situation and make it depend on the divided coalition. Thus, should this amendment pass, SDE is expected to withdraw its motion, and the deadlock in the government would continue anyway. 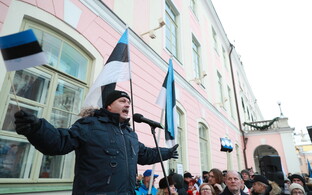 EKRE rally against UN Migration Compact gets out of hand

A survey carried out by Turu-uuringute AS brought out that 26% of voting-age citizens are in favour of the UN Compact on Migration, while 56% are against it.

EKRE and Pro Patria supporters are against it. 89% of EKRE's potential voters reject it, and so do 62% of Pro Patria's.

The percentage of opponents among supporters of the different parties is 89% for EKRE, 62% for Pro Patria and 56% for Prime Minister Jüri Ratas' Centre Party.

Ratas ready to have coalition government vote on Compact

Ratas wrote on social media on Monday morning that he will base his coming decisions in the matter on the outcome of the parliamentary debate and vote.

Should the Reform Party and other opposition forces let the declaration fail in the Riigikogu, he is ready to put the matter to a vote in the government.

A government vote has the potential to tear the government apart. Despite the massive majority of the Centre Party in parliament, the current coalition parties are equal partners in government, with five ministers out of each. Should Centre and SDE's ministers vote in favour of the compact, Pro Patria could leave the coalition.

At the same time, the stance of Centre's MPs and ministers is all but clear following the latest poll. More than half of the party's voters are against the UN Compact on Migration, which could mean a drop in support of Centre come the general election on 3 March next year.

err.ee
Riigikogu declaration Migration
If you notice an error, highlight the text you want and press Ctrl + Enter to report it to the editor
No rates yet
I recommend
No recommendations yet
Telegram
Your recommendation is submitted.
You have already recommended that.
If you have a minute, please rate in more details